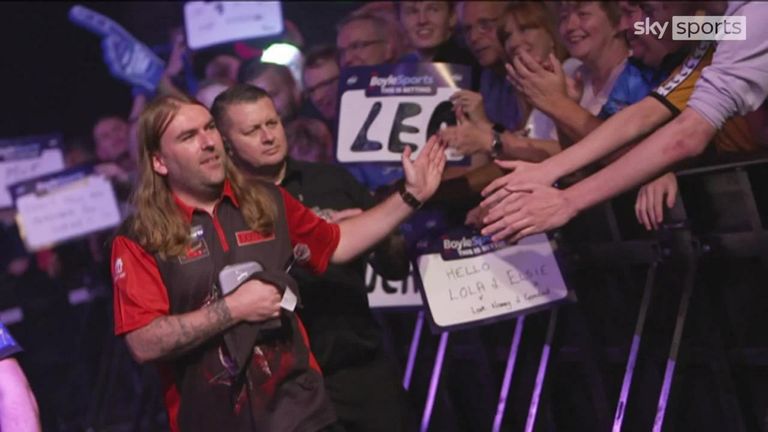 Gerwyn Price kept his cool to reach the last eight of the World Grand Prix on a night that saw world No 4 James Wade join the growing list of big-name early exits in Leicester.

The Iceman is the defending champion having won the tournament for the first time in Coventry last year, and having watched on as two of the world’s top three crashed out on Monday, he entered Tuesday’s action as the red-hot favourite to reclaim his title.

Michael van Gerwen and Peter Wright were eliminated amid Monday’s carnage, and Wade followed in Tuesday’s other last-16 matches, however world champion Price was calmness personified as he recovered from losing the first set to beat King.

The world No 1 will next face Dave Chisnall in a repeat of last year’s semi-final after Chizzy rallied from two sets down to beat Ross Smith, while Ryan Searle and Stephen Bunting also booked their quarter-final spots on an entertaining night of tungsten at the Morningside Arena.

Gerwyn Price ensured there will be one member of the world’s top four in the quarter-final line-up at the World Grand Prix, surviving a scare to eventually see off Mervyn King with a 3-1 second-round victory.

Price had produced a brilliant 100 average to start in style against Michael Smith on Sunday night, with the Welshman the overwhelming favourite for the title after Monday’s drama. 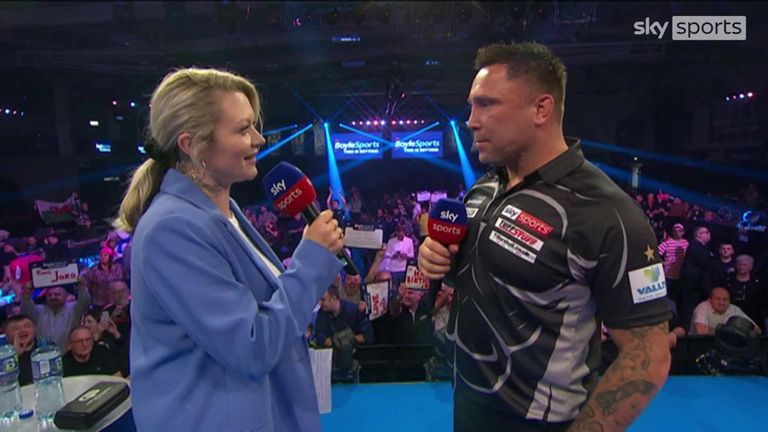 Having exchanged the first two legs, King produced a superb 109 finish to break the Price throw and kept his cool to pin double 12 and take the opener – defying a 96 average from The Iceman.

Price’s highlight in the opening set had been seven perfect darts – on a night where several players came close to a nine-dart leg – and he returned from the break seeking a spark.

He broke in the opener despite missing four darts for the leg, but King had missed five to give the Welshman the chance he needed and with the break behind him, he took the set with a trademark roar and a less trademark double 11 sealing the deal.

Price began to go through the gears and moved into a 2-0 lead in the third set, but King refused to buckle and pounced when Price missed two to wrap up a 3-0 set and forced a crucial fifth-leg decider.

Price prevailed, courtesy of double top to lead 2-1 and it was the same double that sealed his place in the last eight when he recovered from losing the opening leg of the fourth set to claim three on the bounce and stretch his winning run at the Grand Prix to seven matches.

Dave Chisnall produced a spectacular comeback from 2-0 down to beat Ross Smith and seal a 3-2 victory with a sensational 135 finish capping a remarkable turnaround. Dave Chisnall beat Ross Smith in some style with this 135 checkout!

Dave Chisnall beat Ross Smith in some style with this 135 checkout!

Chizzy had won just one leg in the opening two sets as debutant Smith swept into a 2-0 lead to leave the world No 8 facing the prospect of becoming the latest big name to crash out.

Having taken six darts to find the outer ring to get going, Smith never looked back, sweeping to the first set with three successive legs and a brilliant 152 finish capping his dazzling start. 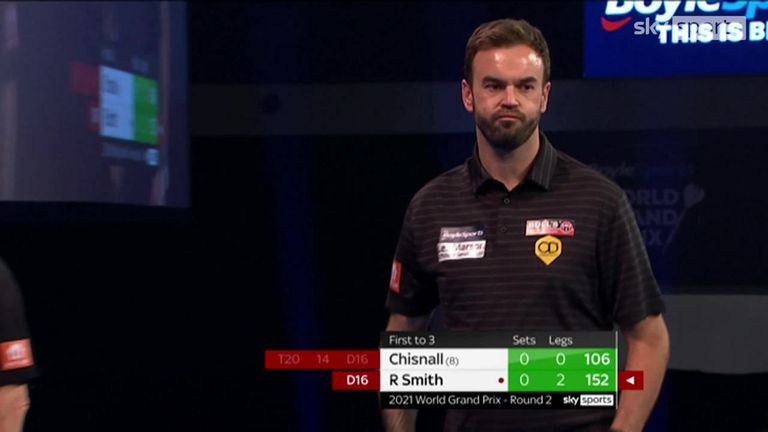 He added three of the next four to stand within one set of the last eight and leave Chisnall on the brink of becoming the sixth seed to crash out.

However, Chizzy is an accomplished player in this format and needing to produce some of the heroics that took him to the Grand Prix final in 2019 and 2013, he conjured up six brilliant darts from 268 to take the third set while averaging 104 in the process.

The pair traded breaks to start the fourth as Chisnall rose to the challenge. A sixth 180 of the match helped him into a position where he levelled the contest and a deciding set would determine the night’s final winner. 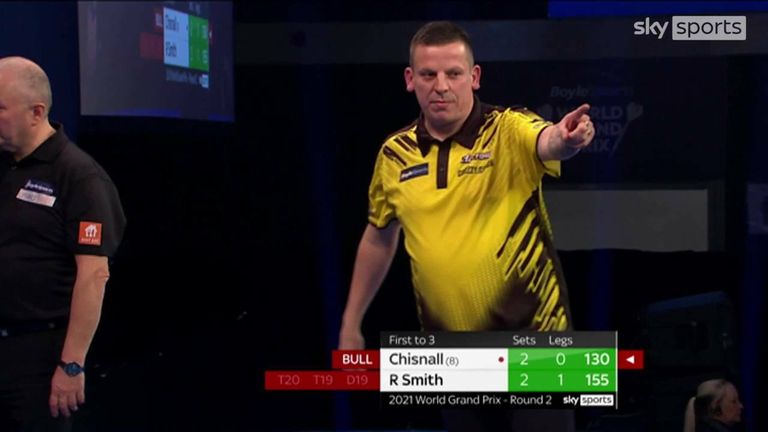 Having watched on as Smith took the first leg, Chizzy’s brilliant 130 finish turned the final set. When Smith made an untidy mess of 76, Chisnall pinned double nine to lead for the first time in the match and needing just one leg for the match.

And he did it in style, a superb 135 finish capping a memorable comeback and keeping his hopes of a maiden major title alive.

James Wade became the third member of the world’s top four to crash out before the quarter-finals in Leicester, falling to a 3-1 defeat at the hands of Stephen Bunting, who continued his resurgence. 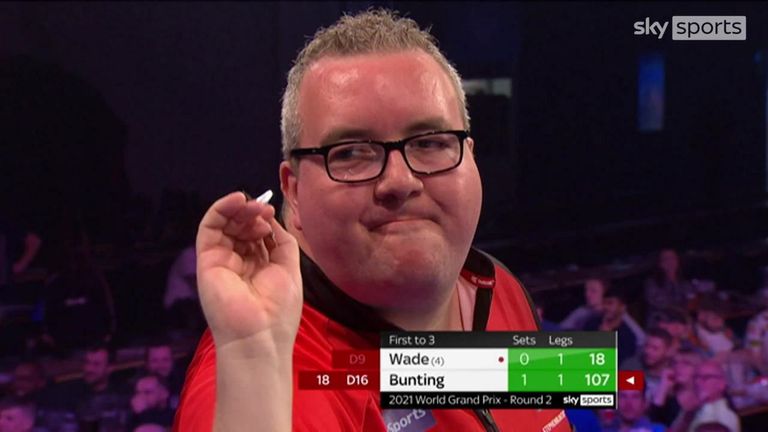 Wade, the world No 4, who was champion in 2007 and 2010 when the event was held in Dublin, had lost the opening two legs of his first-round contest with Damon Heta, and he fell into the same trap against Bunting – but The Bullet was more ruthless than Wade’s first-round opponent.

He swept to the first set with a brilliant 132 finish giving him the early advantage – a pair of bullseyes followed by a pinpoint double 16 but Wade’s riposte was trademark.

The Machine went seven darts of the way towards a nine-darter as he started the second set in style, but with Bunting claiming the next two, Wade had to dig deep – and he did, reeling off the two legs he needed to level the match.

Aided by an uncharacteristically out-of-sorts Wade, Bunting blitzed his way to the next two sets, amid a barrage of 180s and some clinical finishing, a third three-figure finish of the contest taking him to into a 2-1 lead. He took his run to five successive legs by claiming the first two of the fourth – including seven of his own perfect darts as he chased a nine-dart finish and while he may have missed the perfect leg, he held his nerve to hold off Wade and reach the last eight date with Searle.

The Bullet, a semi-finalist on his debut in 2014 at the double-to-start tournament, had beaten Wade on the way to a World Championship semi-final at Alexandra Palace in December and that has kickstarted his career.

A first PDC ranking title in five years followed on the Pro Tour in July, and now he is back in the last eight of this event for the first time in seven years – 12 months on from being forced to withdraw after a positive coronavirus test. 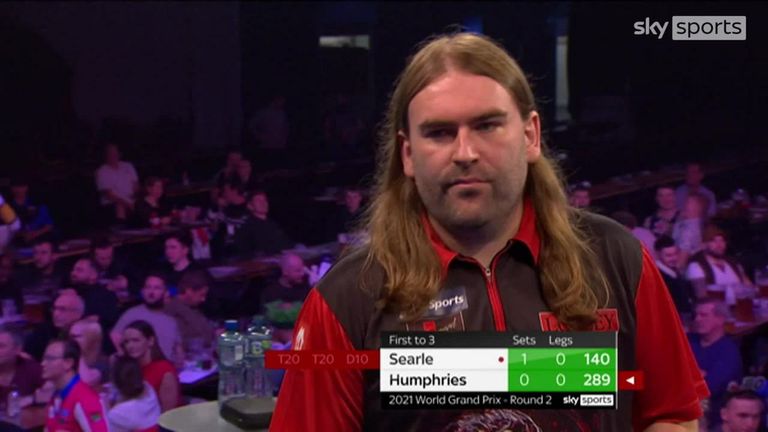 It was Searle, who had survived match darts to topple former World Matchplay champion Dimitri Van den Bergh in the first round, who landed the first blow in a roller-coaster first set.

Heavy Metal produced a brilliant leg against the throw to seize the initiative and backed it up for a 2-0 lead as Humphries struggled to get the starting double on his first visit, opening the door for his opponent.

Fantastic game of darts that between me and Ryan searle! gutted to lose but at the end I think the better player won! love him to to bits, great friend. And I really hope he goes on to Win this title. I know he has that capability! thanks to everyone for the support 👍🏻💪🏻🎯

However, with four finals to his name already this season, including the UK Open, Humphries had backed up his pedigree as a former world youth champion and he stormed back with a brilliant 11-dart leg before forcing a decider when Searle missed four darts for the opener.

When ‘Cool Hand’ missed two of his own for the set, Searle claimed the first set and then produced more fireworks with a pair of sizzling three-figure finishes before adding a fourth leg in succession for a 2-0 lead. After Luke Humphries hit back-to-back bullseyes in a 132 checkout bid, but missed D16, Ryan Searle steps up and takes out the big fish!

After Luke Humphries hit back-to-back bullseyes in a 132 checkout bid, but missed D16, Ryan Searle steps up and takes out the big fish!

Humphries was never adrift in a thrilling contest played at a rapid speed with the third set level at 2-2, Humphries was clinical on his own throw to halve the deficit. 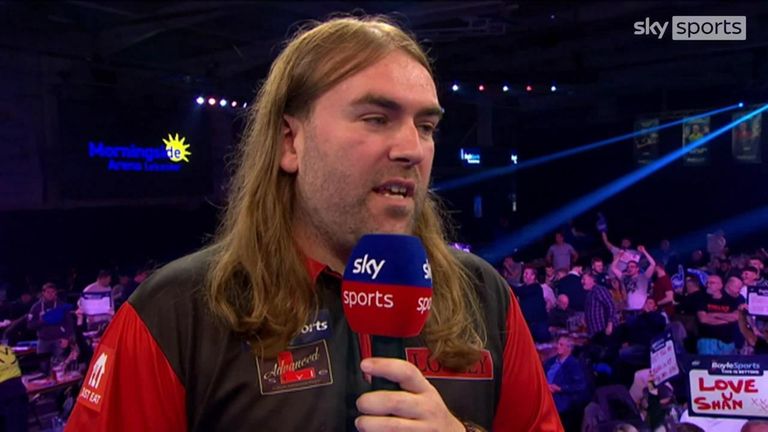 There was still time for the spectacular after Humphries missed a dart at double 16 for a sensational 132 finish that had started with a pair of bullseyes. Searle had the perfect answer, taking out 170 to once again stand within one of the finishing line.

Again the set went the distance, where Humphries twice fluffed his lines, busting a score of 100 to leave the door ajar for Searle, who marched through to his date with The Bullet.

Coverage of the World Grand Prix continues on Wednesday night with the conclusion of the second round, join us from 7pm on Sky Sports Arena