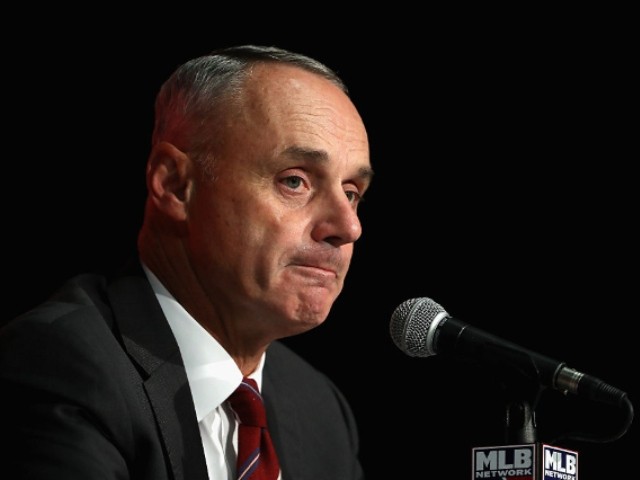 After securing a World Series victory against the Houston Astros, Atlanta Braves fans uniformly booed MLB Commissioner Rob Manfred on Tuesday night, presumably for moving the All-Star game away from Georgia earlier this year over the state’s voter integrity law.

In a video that has since gone viral, the crowd overwhelmingly booed after the game when Manfred stepped up to the microphone to present the commissioner’s trophy. Take a look:

The moment occurred in Houston, as opposed to Atlanta, where the boos would have been inarguably louder and more boisterous.

The city of Atlanta suffered a major economic blow earlier this year when the MLB moved the 2021 All-Atar game to another venue in protest of Georgia’s recently passed voter integrity law, which President Joe Biden and Democrat activists denounced as a racist return to Jim Crow.

“Major League Baseball fundamentally supports voting rights for all Americans and opposes restrictions to the ballot box,” Manfred wrote in a statement at the time. “Over the last week, we have engaged in thoughtful conversations with Clubs, former and current players, the Players Association, and The Players Alliance, among others, to listen to their views.”

“I have decided that the best way to demonstrate our values as a sport is by relocating this year’s All-Star Game and MLB Draft,” he added.

The city of Atlanta lost hundreds of millions of dollars in potential economic revenue over the All-Star Game’s relocation. However, as the Braves seemed poise to win the World Series, Manfred changed his tune regarding the city of Atlanta.

Atlanta played great down the stretch, did a tremendous job in the playoffs,” he told the Associated Press. “They earned their right in the World Series, and we’re looking forward to being back in Atlanta.”

“We always have tried to be apolitical. Obviously, there was a notable exception this year,” he added. “I think our desire is to try to avoid another exception to that general rule. We have a fan base that’s diverse, has different points of view, and we’d like to keep the focus on the field in the game.”

Manfred even went as far to defend Atlanta’s use of the Tomahawk Chop, a celebratory fan gesture that angered woke SJW activists for years.