Boris Johnson’s attempt to rewrite the House of Commons standards regime and save the career of a former Tory cabinet minister was in tatters on Thursday, after the prime minister was forced into a major U-turn.

Amid intense criticism from opposition parties, some Conservative MPs and the media, Johnson dropped his plan to overhaul anti-sleaze rules and create an appeals system for MPs accused of wrongdoing.

Within hours of the climbdown, Owen Paterson, a prominent Brexiter and former cabinet minister, announced he was quitting parliament, rather than face sanctions for breaking Commons lobbying rules.

The former minister, who faced a possible 30-day suspension from the Commons, raising the prospect of a “recall” petition and a by-election, said he was leaving “the cruel world of politics”.

“The last two years have been an indescribable nightmare for my family and me,” said Paterson, whose wife Rose died by suicide last year. “I am unable to clear my name under the current system.”

Jacob Rees-Mogg, leader of the House of Commons, stunned MPs on Thursday by saying that he would start cross-party talks to try to end the toxic row at Westminster over the standards system.

He said that any new system — including a possible appeals regime — should not apply retrospectively to the case of Paterson, who was found to have broken the rules by “repeatedly” acting as a paid advocate for two companies, which paid him £100,000 a year.

Paterson’s resignation will lead to a by-election in Shropshire North, where he won the seat with a comfortable 22,949 majority at the 2019 election.

Rather than set up a Tory-dominated committee to overhaul the current regime, Rees-Mogg accepted any reforms would have to be carried out on the basis of cross-party consensus.

Lindsay Hoyle, House of Commons Speaker, is sympathetic to the idea of an appeals system where an MP faces potentially career-ending allegations, but has told colleagues that any review would take time and should be disentangled from the case of any individual MP. 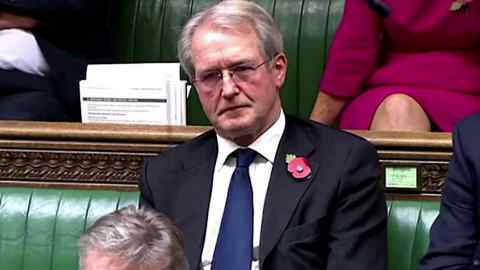 The retreat by Johnson infuriated Tory MPs, many of whom reluctantly voted to ditch the old system and reprieve Paterson under direct orders from Downing Street.

Peter Bone, a Tory MP, said his office had been vandalised overnight because of the vote. Many will now be tarnished by the vote and are already being targeted by opposition parties for having voted for “sleaze”.

Johnson and Tory MPs also faced heavy media criticism, including from Conservative-supporting papers. One Tory MP said after Paterson resigned: “Wish he’d done that yesterday and saved us all the grief.”

“This has been an unbelievable 24 hours even by this government’s chaotic standards,” said Sir Keir Starmer, Labour leader. He urged Johnson to apologise for the “grubby attempt to cover up for the misdemeanour of his friend”.

Meanwhile a former Labour MP has been handed a 10-week jail sentence, suspended for two years, and 200 hours’ community service after being found guilty of harassment.

Claudia Webbe, who now sits as an independent, was convicted last month after a court heard she had made several calls to a friend of her partner over two years and threatened her with acid.

She is appealing but if that fails there will automatically be a recall petition, which would result in a by-election if 10 per cent of the constituency vote for one. She was expelled from the Labour party on Thursday.

Earlier, Lord Jonathan Evans, chair of the Committee on Standards in Public Life and a former head of the domestic security service MI5, warned there was a danger Britain “could slip into being a corrupt country” following Johnson’s attempt to override the Commons rule book.

Kathryn Stone, the independent parliamentary standards commissioner, concluded in a report last month that Paterson had “repeatedly” used his role as an MP to “benefit” two companies — medical diagnostics group Randox and meat processor Lynn’s Country Foods — for which he was a paid consultant. She recommended a 30-day suspension.

The decision was upheld unanimously by the Commons standards committee, which includes three Tory MPs.