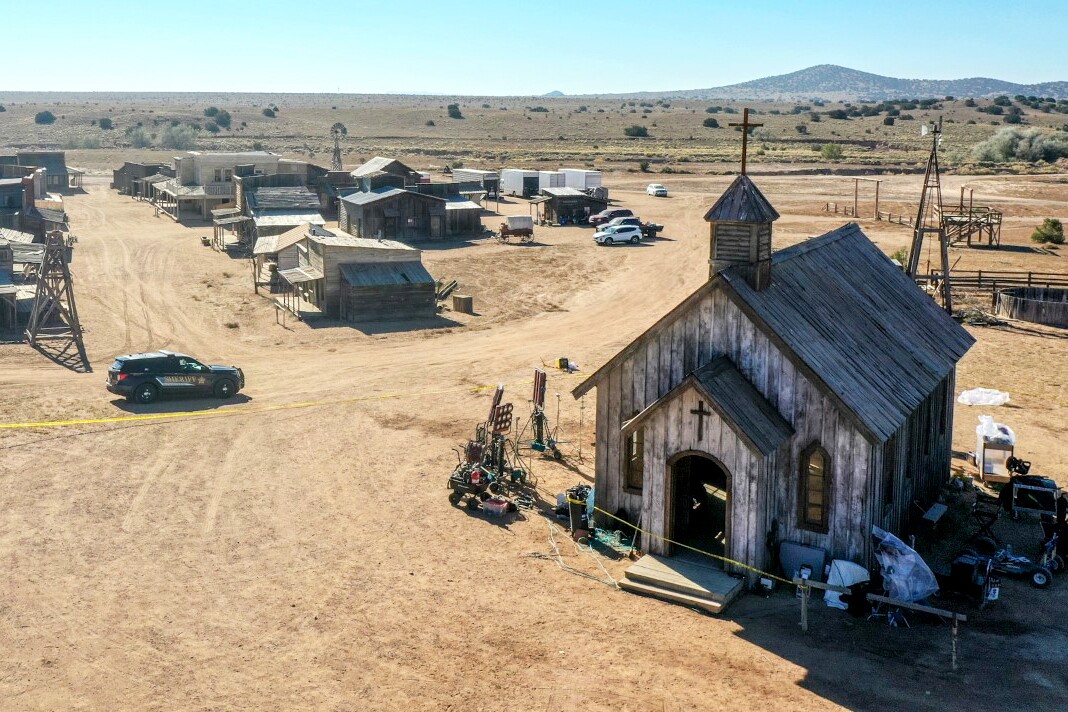 Authorities have determined that the projectile that fatally wounded cinematographer Halyna Hutchins was a lead bullet, one of roughly 500 rounds of ammunition recovered from the set of the film “Rust,” Santa Fe County authorities announced Wednesday.

“We also believe that we have the spent shell casing from the bullet that was fired from the gun,” Mendoza said.

That shell casing, along with the lead projectile and “possible additional live rounds” recovered from the set, will be submitted to the FBI crime lab in Quantico, Va.

Hutchins was fatally shot by what Mendoza described as a Colt .45 revolver fired by actor and producer Alec Baldwin on the set of the film outside Santa Fe, N.M., last week.

The hundreds of rounds recovered on set were a mixture of “blanks, dummy rounds and what we are suspecting were live rounds,” according to Mendoza. Additional rounds were found inside the weapon Baldwin fired, according to Mendoza, though it wasn’t clear if those projectiles were blanks or live ammunition.

Mendoza said a total of three firearms were recovered from the set. The weapon Baldwin fired was an FD Pietta Colt 45 revolver. The other weapons were a single action Army revolver with a modified cylinder, which may not have been able to fire rounds, and an inoperable plastic Colt 45 revolver. Baldwin was playing an outlaw in 1880s Kansas in “Rust,” wielding popular frontier firearms.

Mendoza also said that his office is investigating rumors that members of the crew may have engaged in recreational shooting on the ranch property.

“I would encourage anybody that has any information that any target practicing or any firearm was discharged away from the movie set for practice or for whatever reason, to contact the sheriff,” he said.

The news conference was held outside the Santa Fe County Sheriff’s Office, about 10 miles from the Bonanza Creek Ranch set where “Rust” was being filmed. Mendoza was joined by New Mexico First Judicial Dist. Atty. Mary Carmack-Altwies, who will ultimately decide what, if any, criminal charges will be filed in the case.

While she acknowledged the case was legally “complex,” Carmack-Altwies declined to comment on any potential charges or provide a timeline of when she might reach a decision. The Sante Fe County Sheriff’s Office’s investigation of the shooting is active, according to Mendoza, who said his detectives have several witnesses they still need to interview.

See also  Ryan Owens: State Attorneys General can help families get politics out of the classroom

“If the facts and evidence and law support charges, then I will initiate prosecution at that time,” Carmack-Altwies said. “I’m a prosecutor that was elected in part because I do not make rash decisions and I do not rush to judgment.”

When asked whether Baldwin could potentially face criminal charges, Carmack-Altwies said “all options are on the table at this point,” stressing that she would not be speculating about what charges might follow or which individuals might face them.

Carmack-Altwies said there was no precedent for a case like this in Santa Fe County.

The news conference marked the first time the two lead law enforcement officials on the case have addressed the public since the fatal shooting — a tragedy that comes amid a broader reckoning around working conditions and safety on film sets.

At least three people, including Baldwin, handled the gun on Thursday before the shooting, according to a search warrant affidavit filed by the Sheriff’s Office. First assistant director Dave Halls picked up one of three guns that had been prepared by the production’s armorer, Hannah Gutierrez Reed, from a rolling prop cart and brought it to Baldwin, according to the affidavit.

Halls allegedly yelled “cold gun,” meaning the weapon was not loaded, as he was handing it to Baldwin, according to the affidavit.

The shooting occurred when Baldwin, sitting in a pew of the old wooden church, was practicing removing the revolver from its holster and pointing it toward the camera, according to the affidavit.

The movie’s director, Joel Souza, told the investigator that he heard “what sounded like a whip and then a loud pop.”

Hutchins, who was standing next to camera operator Reid Russell, was struck in the chest. Souza told the detective that Hutchins grabbed her midsection and began to “stumble backwards,” according to the affidavit. Souza, who was behind Hutchins at the time, sustained a gunshot wound to the shoulder and was treated at a Santa Fe hospital and released Friday.

Hutchins was airlifted to a hospital with a trauma center in Albuquerque, where she was pronounced dead.

“Rust” was just the second feature film that Gutierrez, 24, had worked on as lead armorer, meaning she was in charge of overseeing gun safety and usage on set. Questions have been raised about Gutierrez-Reed’s lack of experience and her recent behavior handling weapons on set.

According to search warrants, she left three weapons on a rolling cart outside the church setting at midday Thursday. Souza, the film’s director, told a Santa Fe County Sheriff’s Office investigator that multiple people had been handling the guns and that he wasn’t sure whether anyone had checked them for safety after the group came back from lunch.

Hours before the shooting, several members of the crew walked off set in protest of what they said were long hours, long commutes and long waits for paychecks, as well as a lack of safety protocols that resulted in multiple accidental discharges of prop guns prior to the fatal incident last Thursday.

Safety protocols that are standard in the industry, including gun inspections, were not strictly followed on the set, several crew members told the Los Angeles Times on Friday. The crew was 12 days into a 21-day shoot for the low-budget independent film when production was halted.

Halls, the first assistant director, has also come under scrutiny before. In 2019, he was fired from the film “Freedom’s Path” after a crew member had a minor and temporary injury when a prop gun “unexpectedly discharged,” according to a producer from the film who declined to be named because he was not authorized to comment.

Baldwin, Halls and Gutierrez Reed “have been cooperative with the investigation and have provided statements,” according to Mendoza.

Mendoza said that it would be up to the district attorney to determine whether accusations that have been made about unsafe practices and negligence on other sets that Halls and Gutierrez-Reed previously worked on would be taken into account as she assessed possible charges.

“We are going to follow up on some of those statements that are made, that there were other incidents,” Mendoza said, urging anyone who might have information to contact the Sheriff’s Office.

On Tuesday, New Mexico Gov. Michelle Lujan Grisham suggested that the state may push to adopt stricter safety protocols for productions filming in New Mexico, where production has become an integral part of the state economy in recent years.

“I think there was some complacency on the set and I think there are some safety issues that need to be addressed by the industry and possibly by the state of New Mexico,” Mendoza said.