Queen Elizabeth recalled fond memories of her late husband, Prince Philip, while speaking at the opening of Scottish Parliament on Saturday.

It marked the first time the queen has spoken publicly about her late husband since his death in April at the age of 99.

“I have spoken before of my deep and abiding affection for this wonderful country and of the many happy memories Prince Philip and I always held of our time here,” the queen said. “It is often said that it is the people that make a place and there are few places where this is truer than in Scotland, as we have seen in recent times.”

The queen and the duke were married for 73 years.

The queen once referred to Philip as her “strength and stay” in an address made in honor of the couple’s golden wedding anniversary, which marked 50 years together.

“He is someone who doesn’t take easily to compliments but he has, quite simply, been my strength and stay all these years, and I, and his whole family, and this and many other countries, owe him a debt greater than he would ever claim, or we shall ever know,” the queen said on Nov. 20, 1997.

Though the queen didn’t publicly comment on Philip’s passing at the time, her son, Prince Andrew, said his father’s death “left a huge void” in his mother’s life.

Members of the royal family gathered for a pared-down funeral to honor the duke on April 17. 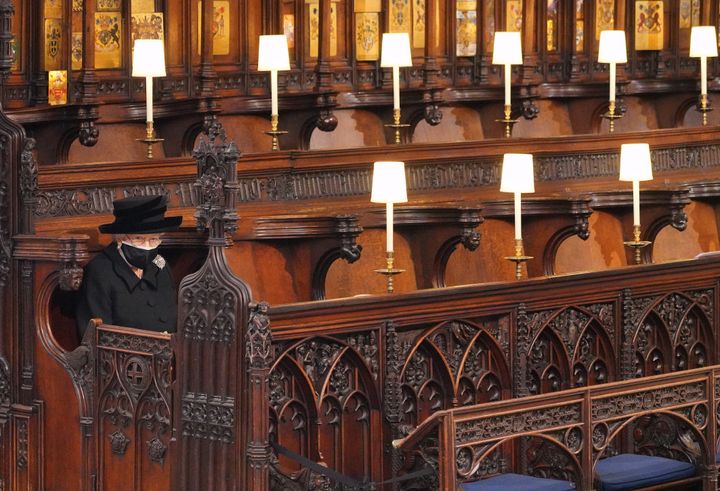 Queen Elizabeth sits alone during the funeral of Prince Philip in St. George’s Chapel at Windsor Castle on April 17 in Windsor, England.

Mike Tindall, who is married to Princess Anne’s daughter, Zara, said there were “eerie” moments at the procession and funeral, which was limited in scope due to the coronavirus pandemic.

“I look back on the day I think as eerie as it was with no crowds and the social distancing and the way everything was,” the former athlete said on his podcast, “The Good, The Bad & The Rugby,” at the time. “I think it was the perfect day for how he would’ve liked it, if that makes any sense whatsoever.”