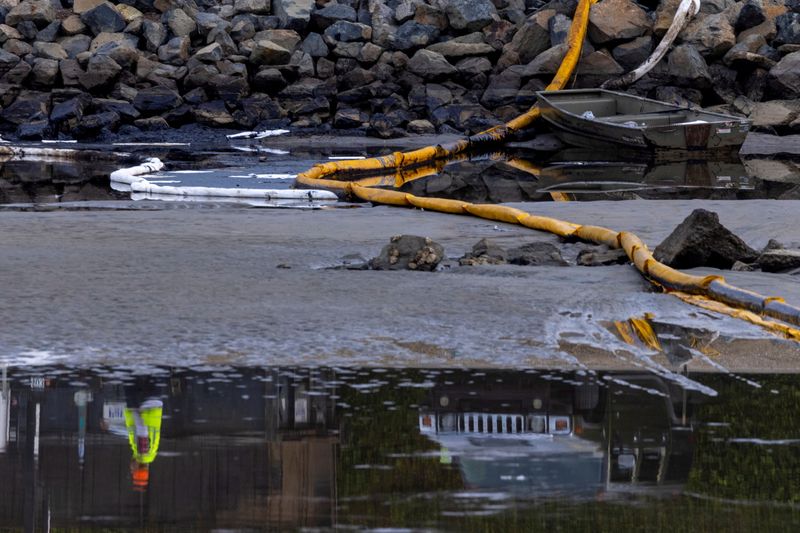 © Reuters. FILE PHOTO: A worker is reflected in the water of an estuary after a major oil spill off the coast of California came ashore in Huntington Beach, California, U.S., October 4, 2021. REUTERS/Mike Blake/File Photo

By Jessica Resnick-Ault and Nichola Groom

LOS ANGELES, Calif. (Reuters) -A section of the oil pipeline that burst off the Southern California coast was displaced 105 feet (32 meters) across the ocean floor, officials said on Tuesday, fueling speculation that a ship’s anchor may have caused the environmental disaster.

The revelation came as the U.S. Coast Guard and drilling company Amplify Energy (NYSE:) Corp came under further scrutiny about the time it took to respond to the spill, amid reports that mariners first reported seeing oil in the water on Friday night, when official notification did not come until Saturday around midday.

Roughly 3,000 barrels (126,000 gallons) of spilled into the Pacific Ocean, killing wildlife, soiling the coastline and forcing officials to close beaches in the cities of Huntington Beach, Newport Beach and Laguna Beach in Orange County, just south of Los Angeles.

The oil appears to have leaked through a 13-inch (33-cm) gash in the pipe, which was “pulled like a bowstring” about 105 feet from where it should have been, Martyn Willsher, chief executive of Amplify Energy, told a news conference. Amplify owns the pipeline and connected rigs.

In all a 4,000-foot (1.2-km) section of the 17.7-mile (28.5 km) pipeline was displaced laterally, as discovered by a remotely operated vehicles, U.S. Coast Guard Captain Rebecca Ore told reporters.

California Governor Gavin Newsom said the accident underscored the risks of relying on fossil fuels in a state already suffering from drought and wildfires that experts link to human-caused climate change.

“We need to grow up and grow out of this dependency,” Newsom told a separate news conference in Huntington Beach, promoting renewable energy alternatives.

A “good Samaritan” first reported an oil sheen on the water’s surface to authorities on Friday night, but that information was “inconclusive,” said Ore, the Coast Guard captain.

Satellite imagery from the federal government’s National Oceanic and Atmospheric Administration confirmed the presence of oil in the water hours later, Ore added.

Tom Umberg, a state Senator who represents the coastal region, told a news conference that officials needed to explain why the response was delayed and whether the pipeline had been adequately inspected.

“It’s very difficult for us to understand how this could occur,” Umberg said, joining a chorus of indignant elected officials and citizens.

Huntington Beach, which advertises itself as Surf City USA, is one of the rare places in Southern California where oil platforms are visible from the beach.

Willsher, the Amplify CEO, refused to speculate on the cause, a day after he suggested the pipeline may have been damaged by a ship’s anchor.

“I’m not here to speculate about the cause. There will be a full investigation,” Willsher said. “Obviously the pipeline has been displaced. It’s a 16-inch steel pipeline that’s a half inch thick and covered in an inch of concrete. For it to be moved 105 feet is not common.”

The pipeline runs along the ocean floor from the Elly platform, about nine miles (14.5 km) offshore in 255 feet of water, then heads toward port. On Tuesday, the U.S. Department of Transportation said the entire pipeline should remain shut until ordered to be reopened.

If a ship’s anchor did rupture the pipeline, it may have been a consequence of the global pandemic. COVID-19 led to an extensive decline in shipping, and then long delays as consumer demand rebounded.

There were 63 container ships in San Pedro Bay waiting to unload at the ports of Los Angeles and Long Beach, according to the Marine Exchange of Southern California. On Sept. 19, a COVID-era record 97 ships were backed up.

Before the pandemic, there was typically no more than one container ship at anchor in the bay, according to Captain Kip Louttit of the Marine Exchange.

An anchor strike is a plausible explanation, said two former Amplify employees who asked not to be named. They noted anchor strikes have dented or scratched offshore pipelines before.

Environmental watchdog group SkyTruth said satellite imagery from Oct. 1, the day before the spill was reported, shows cargo ships anchored near the area where the pipeline runs, according to government maps. The closest, however, was about 450 meters from the pipeline, SkyTruth President John Amos said before the displacement was reported.

“That seems like a comfortably long distance to separate that pipeline from that ship, but one thing I don’t know is how accurate is this government data on exactly where this pipeline sits on the seafloor,” Amos said in an interview.