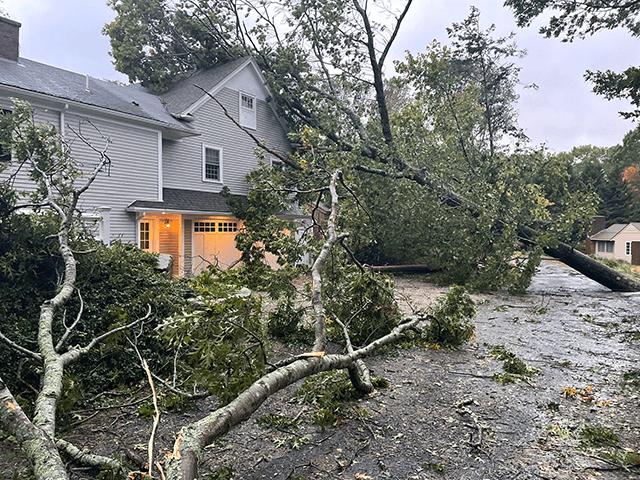 A nor’easter battered eastern Massachusetts, leaving over 490,000 businesses and homes without power by midmorning on October 27.

The storm wreaked havoc throughout Massachusetts’ hardest-hit areas, including Boston’s south shore, Cape Cod, and Cape Anne, CBS Boston reported. By noontime, the number of customers without electricity was 494,381. Several communities remain entirely without power, according to the outlet.

As of 1:32 p.m. Wednesday, 478,437 customers were still without power, according to Massachusetts Emergency Management Agency.

Good news: that number decreased for the first time this morning. it’s a sign of things to come #mawx #WCVB @MassEMA pic.twitter.com/VJF04uqCtT

A man named Harry Green from Brockton, Massachusetts, captured footage of a transformer catching fire and exploding, according to CBS Boston.

INCREDIBLE and scary video
WASHINGTON AVE AND PINE STREET, BROCKTON
Harry Green:
I heard a boom ran over to the neighbors and banged on there door cause trees were on fire then house across the street caught on fire pic.twitter.com/7BzCnkWJKr

Meteorologist Cindy Fitzgibbon of WCVB reported winds reached speeds of 94 MPH in Edgartown, 87 mph in Scituate, 84 mph in Dennis, 84 MPH in Duxbury, and 78 MPH in Rockport.

“It was what we call a bomb cyclone, or the meteorological process is bombogenesis. It’s when the pressure drops in the storm 24 millibars in 24 hours,” Fitzgibbon said during her weather update. “That really rapid intensification of the storm creates those strong winds, and that is what we saw this morning.”

During another Fitzgibbon update, the WCVB studio appeared to lose power momentarily:

Took a power hit on the air this morning… lights 💡 out! #WCVB https://t.co/OpTbxoFDuD

The storm left fallen trees and downed power lines throughout the south shore and Cape Cod, according to CBS Boston. Duxbury’s Fire Department tweeted that it responded to 90 calls over 12 hours while the Nor’easter took place. As of Wednesday morning, 91 percent of Duxbury was without power, and officials urged citizens to stay off the road.

DXFD has responded to over 90 calls in the last 12 hours due to the storm. 91% of the town has now power. This is what most parts of town look like. Please stay off the roads unless it’s absolutely necessary. #weather pic.twitter.com/8V9dxS9LQE

Just spoke w/the #Duxbury homeowner here, whose husband was sleeping upstairs, right under this roof where a tree crashed through. She woke up to his screams. Thankful he is OK, but they’ve been ordered to leave. #wbz pic.twitter.com/nn8ZfAIm94

One tree in Beacon Hill, a Boston neighborhood that is home to Massachusetts’ State House, was uprooted from the sidewalk, according to a tweet from OnlyInBOS:

The Cohasset Police Department tweeted images of sailboats that were thrown across the Cohasset Harbor:

Massachusetts Gov. Charlie Baker (R) tweeted, “This morning, @massltgov and I brought together the administration’s emergency response and public safety officials to discuss storm impacts and response efforts. (1/2)” In a follow-up tweet, the governor added, “Our administration is working with utilities to speed up recovery times, but crews are still assessing the level of damage. If you are in an impacted community, please be careful: check in on neighbors, stay away from downed power lines and stay off the roads. (2/2)”

Our administration is working with utilities to speed up recovery times, but crews are still assessing the level of damage.

If you are in an impacted community, please be careful: check in on neighbors, stay away from downed power lines and stay off the roads.