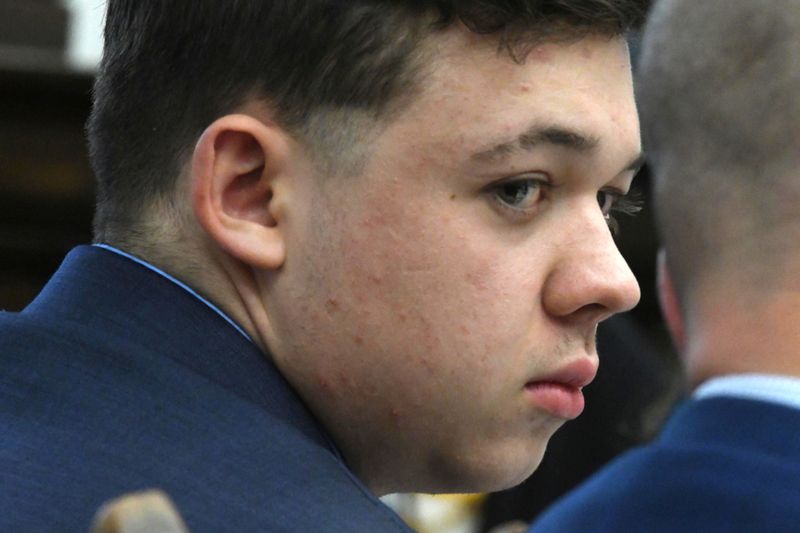 KENOSHA, Wis. (Reuters) -The judge in the murder trial of U.S. teenager Kyle Rittenhouse dismissed a juror on Thursday because he told a joke about the shooting of Jacob Blake, a Black man whose shooting by a policeman sparked protests in Kenosha, Wisconsin, last year.

“The public needs to be confident that this is a fair trial,” Kenosha County Circuit Judge Bruce Schroeder told the juror, an older white man who declined to repeat the joke he told to a sheriff’s deputy outside the courtroom this week.

“It had nothing to do with the case,” the man told the judge.

It was “bad judgment to tell a joke of that nature,” Schroeder said, adding that he had no choice but to remove the man from the jury. The man then left the courtroom.

Blake was shot several times in the back and left paralyzed from the waist down in the shooting. Prosecutors cleared the policeman of any wrongdoing, saying he acted in self-defense. Blake has sued him.

The shootings Rittenhouse is charged with occurred amid the chaos that erupted in Kenosha after Blake’s shooting. Rittenhouse, now 18, says he acted in self-defense.

Rittenhouse, a resident of Antioch, Illinois, is charged with reckless and intentional homicides in the killing of Joseph Rosenbaum, 36, and Anthony Huber, 26, and attempted homicide for wounding Gaige Grosskreutz, now 27, with a bullet to the arm.

Testimony resumed on the trial’s fourth day with Martin Howard, a Kenosha police detective, telling the jury that Rosenbaum had been holding a large chain – a potential weapon – earlier in the night but not at the time he was shot.

Prosecutors called Richie McGinniss, the chief video director of the Daily Caller, a conservative website. McGinnis was a witness to the Rosenbaum shooting and is seen as critical to the case because he can speak to whether Rosenbaum provoked the teenager.

McGinnis testified that Rosenbaum had been lunging for Rittenhouse’s rifle when he was shot and that it was not entirely clear what caused him to fall facedown.

“His momentum was going forward,” McGinnis said. “Perhaps it was the shots that caused him to fall flat.”