The EU’s top diplomat ignored the advice of his own staff in deciding to send observers to elections in Venezuela next month, over-ruling warnings that the mission will legitimise president Nicolás Maduro’s regime and tarnish the reputation of the bloc’s election observation missions.

Josep Borrell, head of the European External Action Service, the EU’s security and diplomatic arm, said last month he would send observers to Venezuela’s regional and municipal polls in November, for the first time in 15 years.

That decision came despite an internal report seen by the Financial Times, in which a team of EEAS officials sent to the country in July to assess the feasibility of deploying election monitors warned that such a move “may be contrary to the political line of the EU”.

“The deployment of an EU (mission) is likely to have an adverse impact on the reputation and credibility of EU (observers) and indirectly legitimise Venezuela’s electoral process,” the report reads.

Citing numerous human rights violations and restrictions on freedoms, it concluded that “the minimum conditions for election observation are not met at this time”. It did however add that “the Venezuelan authorities have hinted that this could change through political negotiation”.

Maduro has been internationally condemned for widespread human rights abuses and political repression since taking over as Venezuela’s president in 2013.

Borrell, a former Spanish foreign minister who has long called for the EU to take more interest in the Venezuelan crisis, said when unveiling the EU observer mission that he believed it could constitute an “important contribution” and “a path towards credible, inclusive and transparent elections” in Venezuela.

After the report was written, Venezuela’s main opposition bloc reluctantly agreed to participate in the November 21 elections, although without any expectation that they would be free or fair.

Maduro controls most media, has taken over political parties, jailed opponents and appointed allies to the electoral council. His government hopes that an internationally recognised election might help secure relief from economic sanctions.

Last month, a UN fact-finding panel presented the latest evidence of rights abuses, concluding that the Venezuelan justice system had played a significant role in state repression by allowing evidence obtained through torture to be admitted in court. 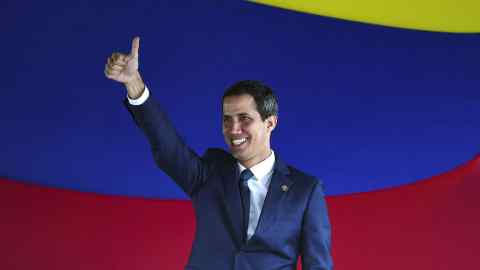 “Is Borrell ready to legitimise a dictatorship?” said Carlos Vecchio, the Venezuelan opposition’s envoy to Washington. “This report reflects what we have always said, namely that there are no conditions for an electoral process in Venezuela. You don’t need to wait until November 21 to see what is happening: today, the political parties are controlled by Maduro, the disqualifications [of opposition politicians] continue.”

EEAS spokesman Peter Stano said in response to questions from the FT that “the deployment of an EOM in no way represents a legitimation of an election . . . This political decision is fully consistent with the EU position on Venezuela”.

Borrell’s decision was taken after Maduro’s electoral council promised to allow election observers to work “according to [the EU’s] methodology” and had the backing of opposition groups, Stano said, adding that the mission could be recalled if that agreement was broken.

Venezuelan opposition figures have complained of pressure from European diplomats to take part in the elections and to return to Norwegian-brokered negotiations with Maduro’s government, even though these have failed three times before.

The EU and the US are searching for ways to resolve Venezuela’s political crisis after previous attempts to topple Maduro through ever-tighter economic sanctions and by recognising Vecchio’s opposition colleague Juan Guaidó as “interim president” failed.

Maduro has clung to power with support from Russia, China, Cuba and Iran. The US has accused his government of raking in billions of dollars from drug trafficking and gold smuggling.