Lyndon Dykes rescued Scotland with a dramatic late winner against the Faroe Islands to put Steve Clarke’s side within 90 minutes of a World Cup qualifying play-off spot.

The Scots travelled to Torshavn on a high after a terrific 3-2 win over Israel at Hampden Park on Saturday, but the visitors found it all a bit of a struggle.

However, with four minutes of normal time remaining, a cross from substitute Nathan Patterson came off Dykes and ended up in the net. After what seemed like an eternity while Slovenian referee Matej Jug checked for handball, the goal was awarded for a crucial 1-0 win.

Scotland need three points from their final two Group F fixtures next month, the first of which is a trip to section makeweights Moldova before the final game at home to runaway group winners Denmark.

Man of the Match: Lyndon Dykes

There was growing belief and confidence in the Scotland camp following the last-gasp win over Israel but caution in equal measure against a Faroes side who bloodied Scotland noses twice in the past, with draws in European Championship qualifiers in 1999 and 2002.

Clarke insisted March’s 4-0 home win earlier in the section had been no reflection of a tough game and that view was vindicated in the first half in which a tentative, one-paced Scotland team struggled to get going against a well-organised home side who had chances to take the lead.

Scott McTominay’s angled drive after 21 minutes was beaten away by Faroe Islands ‘keeper Teitur Gestsson for a corner that came to nothing. But moments later, the keeper’s long punt down the park had the Scottish defence in trouble and it took a terrific save from Craig Gordon to keep out a close-range effort from attacker Ari Mohr Jonsson. 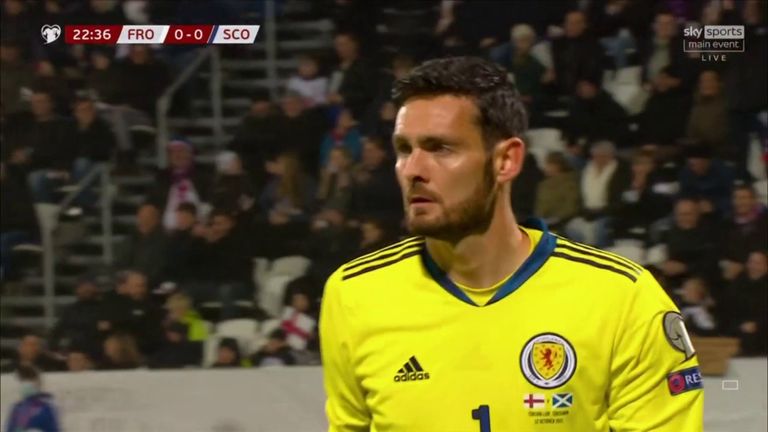 Craig Gordon made a terrific close range save to keep the scores level in Scotland’s World Cup qualifier against the Faroe Islands.

See also  IPL 2021: "We got some fight and the heart in the second half, which was great to see" - Kane Williamson

A minute or so later, Dundalk defender Sonni Nattestad headed a cross from Brandur Hendriksson over the bar from six yards. It had turned into a slog for the Scots.

Christie, who would pick up a booking which rules him out the next game against Moldova, did get behind the Faroes defence in the 37th minute but could not pick out Dykes with his cut back.

Gordon saved a long-distance free-kick from Hendriksson just before the break and McTominay hit a shot over the bar from the edge of the box after being set up by Dykes.

In the 63rd minute midfielder Billy Gilmour fired a shot from 20 yards past the post but at the other end, Faroe Islands captain Hallur Hansson came closer with a better-struck shot.

Dykes picked up a yellow card from referee Jug for a challenge on Odmar Faero which means he is also ruled out of the Moldova game before McGregor replaced Jack Hendry.

In the 75th minute, with the game still evenly balanced, Gilmour was released into the box by McGregor but hit Gestsson with a rather tame shot before the ‘keeper saved John McGinn’s close-range header from a Fraser cross.

Gilmour drove another attempt wide before Kevin Nisbet and Patterson came on for Christie and Fraser in the 83rd minute for a last throw of the dice. 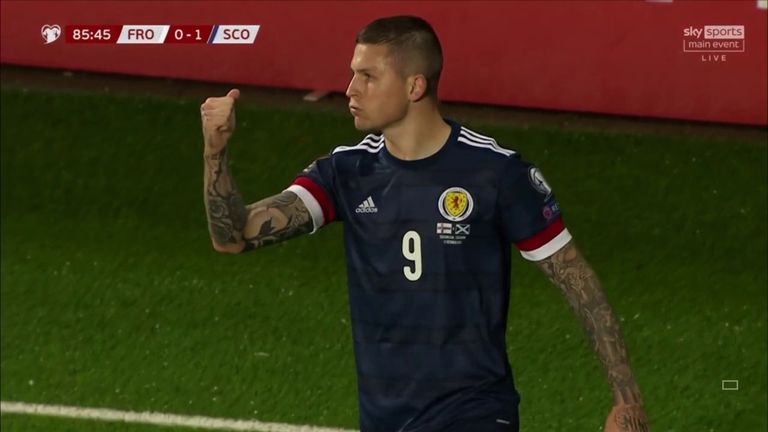 Lyndon Dykes delivers a priceless goal for Scotland as he puts them ahead against the Faroe Islands in their World Cup qualifier.

The gamble paid off when Patterson’s cross from the right came off the chest of Dykes and into the net and after a nervy VAR check for a handball, the goal stood. Seldom was a goal so welcomed with relief and now three points in Moldova will ensure a play-off spot.

What the manager said… Steve Clarke was pleased with Scotland’s patience and belief as they came away from the Faroe Islands with a hard earned three points.

Scotland manager Steve Clarke: “It was a tough night – what we expected, to be honest. The Faroe Islands had lots of energy, put us on the back foot in the first half and made us a little bit nervous. We relied on Craig Gordan, who produced an unbelievable save and had great hands all night and gave us surety behind the defence, which was really important coming to a place like this.

“Second half I thought we were better, we had better control of the game. Patience and belief, and just keep plugging away. You are not always going to win in a fantastic free-flowing style, maybe as we did second half Saturday when everyone’s excited. This game was more nervous, it was about showing a different side to the team and making sure that we ground out the result. Three points is three points, the same as we got on Saturday.

“We are always trying to improve. I will go away and analyse the games. I will look at what I did right, what I did wrong, I will look at what the players did right, what they did wrong, and we will try and be better again next month. But let’s not be too sad about it. It’s six points, it’s been a really big camp for us, it’s four wins in a row, Lyndon gets another goal, which is great, and we have put ourselves in a really good position. Now we have to make sure that next month we finish the job.” 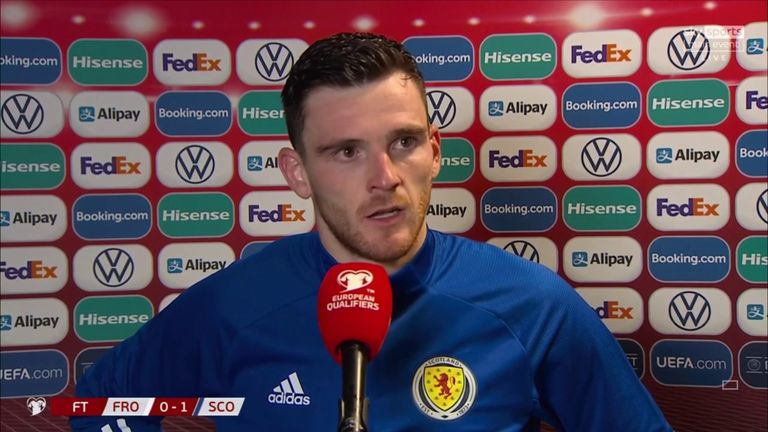 Scotland captain Andy Robertson was not impressed by his side’s performance against the Faroe Islands but was delighted to take all three points in their bid for World Cup qualification.

Man of the Match – Lyndon Dykes

Lyndon Dykes became the first Scotland player to score in four consecutive appearances for the senior national side since Colin Stein in May 1969.